In 1994, a Dutch lady Ellen Broerse started corresponding to one man in Bangkwang prison in Thailand. This one act has since developed to embrace hundreds of prisoners in various Thai prisons. The team in Perth has been visiting Thailand since 1995 and focus mainly on prisons in Bangkok and surrounding areas.

Many of the inmates both men and women  come from developing countries such as Burma, Cambodia, Malaysia, Laos, Nepal and some African countries. The majority of them are serving LIFE sentences for picking up a parcel containing drugs in Bangkok. Their countries have no social security, so out of sheer despair they became drug mules in order to earn a quick dollar. Most of them were unemployed, hungry and hopeless and had nothing to lose. Many of them only did this once, were tipped off, thrown into jail and were never paid a cent. Now behind bars, they are very remorseful.

Through letters written by volunteers, the prisoners find renewed strength, hope and encouragement. They experience God’s love through people who care for and about them, where their own families had often abandoned and forsaken them.

If you are currently writing to a pen pal in prison, please continue to do so. In Isaan, English is not widely spoken or read and we have had to adapt to the challenges this poses. In light of this fact, the onus of writing to prisoners have started to shift to the local Thai Christian churches. It is a great blessing to be able to receive a letter in your native tongue which is the case for many of the inmates. If you can write in Thai and would like to have a pen friend, please contact our facilitator in Thailand.

This is the year a second team started visiting prisons in Thailand, this time in north-east Isaan. This area is not a popular tourist destination, mostly rural and impoverished but home to about 22 million people. The team visits annually.  Every year new prisons are added to the list and expansion opportunities exist to include many more in the future.

There are about 40 prisons in Isaan alone and they vary from provincial, central to high security prisons. The charity now only operates from Brisbane, Queensland and supports the Thai team that is operational in Isaan. 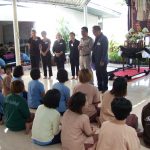